I assumed that the very first post I saw was someone posting a ten-year progress picture because they wanted to. I didn’t realise it was a viral “challenge” sweeping over all social media platforms.

I’ve never liked these “challenges” that encourage people to essentially post a nice picture of themselves. I don’t mean to judge but I do feel like it’s a cry for attention. It’s a post that demands others to tell you how cute you looked then and how even better you look now. It’s a “challenge” that seeks self-affirmation from others.

I don’t want to judge. Everyone should be able to post whatever they want.

Thing is, I don’t think that it is a challenge for the vast majority of people.

Hence why I’ve been using quotation marks until now because it is a challenge for some.

It’s a real challenge for me and my ED to post a comparison picture but I decided to compare two pictures of myself.

I removed every single picture which made me feel “fat” or “ugly” and as a result I have lost some physical reminders of those years. It’s like I tried to erase a part of me. I couldn’t accept that I had made myself that way and so I deleted the memories.

I’m currently trying to find any pictures of myself that survived the “Facebook purge” or ones that existed before the days of camera phones and social media. I’m going through an exercise of trying to love that girl in those pictures so I can accept my past rather than trying to erase it. That in itself is a challenge.

Scouring through my old albums was a very real and painful challenge. It hurt to see who I was before and during my darkest days. It pained me to face the hurt behind the photographs.

I downloaded it and combined it with the most recent picture I have of myself. It was from 7 days ago and I was very drunk. It was the first time I had really let myself drink since mid-November (due to the annual “December Fears”) and I had decided to stop being scared of alcohol and parties and to “rip the band aid off” to enjoy myself. You can tell from the picture that it worked!

I haven’t been able to post it on social media though and, to be honest, I don’t need to.

Half of me doesn’t want to post it because I’m scared. My stage of recovering isn’t strong enough to let me accept that girl on the left. I still blame her for the things people did and said to her. The things that ultimately resulted in and helped the ED continue, even though I know that it isn’t her fault.

The other half of me simply doesn’t want to post it. I know I spent years seeking affirmation from others and I’d like to stop that behaviour. I still post pictures of myself but I’m no longer trying to post the most perfect picture of myself to gain likes from people I don’t even talk to. I’m posting the pictures where I feel like I look incredibly happy. Something I’ve not seen in my pictures for a while.

I’m going to post it here though. This blog has always felt safer than social media even though I know my connections have access to it. 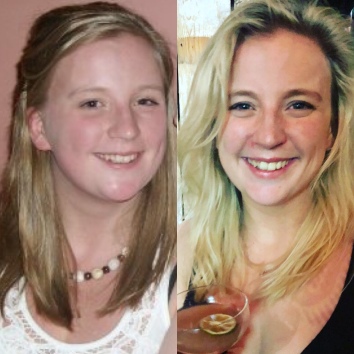