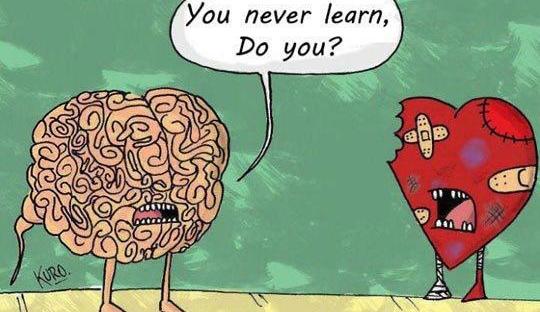 I should have listened to my brain instead of following my heart. It was right, it’s always right.

I’ll be okay, deep down I knew it was coming and I know it was right. My brain knows but my heart aches.

It was a nice visit nonetheless and being friendly is fine with me and don’t get me wrong because I knew it was too soon for any sort of reconciliation. I know that everything is still too raw for both of us and that there could be potential in the future, but there’s just one little thing that’s stuck in my head. I know where I stand right now and that’s fine but he said that being out of a relationship made him realise how stressed he was being in one.

That he loved me but didn’t realise until now that being in a relationship stressed him out.

I had no idea he was unhappy with me. I mean, I thought he was distant and didn’t want to be with me but he told me he did and I believed him.

I thought he wasn’t treating me like a girlfriend and now I know why. He was unhappy with me. He didn’t like the relationship we were in and was waiting for me to move to London so things would get better. But he never told me that back then. He wouldn’t tell me why he seemed so stressed out but now I know.

I was the problem.

It makes so much sense now.

Everything makes so much more sense. Deep down he didn’t want me and yes he wanted to stay when we broke up, he wanted to try harder than I could but now that its over he mustn’t have been truly happy in the first place.

That’s probably why he wasn’t telling me why he was stressed out and being distant. Because I was the problem. I’m always the problem. I know I’m too much, I know I’m damaged and have a million things wrong with me. I also know he loved me, he really did but I mustn’t have been good for him either.

I was so unhappy back then too because I felt he wouldn’t open up to me and talk and all I wanted to do was help him with whatever was stressing him out. Now I realise it was me. It was being committed to me at that time that stressed him out.

I caused everything to go wrong. Every last detail was my fault.

I’m not trying to play the victim. He would have been so hurt to to hear that I was unhappy and had reached the decision I reached 2 months ago. But I was  unhappy because I was convinced he didn’t like me being his girlfriend. I just really wish he had told me what the problem was. Rather than my mind jumping to conclusions…then again…surely my mind jumped to the right conclusion? That he wasn’t happy with me.

It hurts so much to know that I caused so much stress. That he now realises being in a relationship was too much. I feel like I made him so unhappy and I can’t believe I did that.  I really love him and I wanted it to get better, I couldn’t understand what was going wrong but now I know.

I don’t know what I did wrong.

But it was me. I was doing something wrong.

I’ve never been good enough for many things. We had a lovely time hanging out and I do want to stay close but that realisation has really hurt me. It’s a different kind of pain right now. I’m not sure how to cope with this type of pain.

I should have listened to my brain.

My heart is so much more broken than before.